In March, we celebrated the 5th anniversary of our workshop “Sketching with Hardware”. In 7 days, 12 students learnt to use electronic components, to create new creative user interactions and realized their own physical computing projects. The overarching topic for this course was  ”Bionics”. Again, at the final presentation the crowd had the chance to experience five extraordinary experience prototypes. During the following days, all projects will be presented on this blog. Today: Part 2, Like a Bird!

by Marion Koelle and Marius Hoggenmüller

Birds have a sophisticated technique to survive the frigid temperatures of winter. They possess a dense coat of feathers which can be puffed out to trap little pockets of air close to the bird’s body. These airpockets insulate the bird’s body and protect it from excessive heat loss. With this technology birds can sustain their body temperature of approx. 40° C even at extreme frost! At chilly temperatures they therefore often look like small fuzzy featherballs (see figure 1). 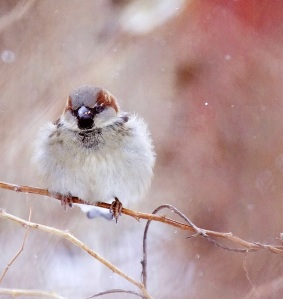 Figure 1: Sparrow with puffed up feathers

For our project we adopted the birds‘ anti-freezing technique and integrated it in an environment-aware interactive headpiece – at first glance: a simple, every-day bobble hat.

The basic principle is very simple: if the ambient temperature drops below a certain value or the user feels cold the heat-insulating functionality of the hat is activated and the ‚feathers‘ of the hat are puffed out. The hat’s control system involves two modes, one based on the sensing of the ambient temperature and another one which is based on user-input via a touch-slider located at the hat’s brim .  It is possible to switch between modes by turning the hat’s bobble.

The skeletal structure of the headpiece consists of two rows of inflatable ‚feathers‘ made from a customary air mattress, which are comprised by a cover made from felt  (see figure 2).  If the compressor is turned on the air takes its way through a system of flexible plastic tubes located at the hat’s back and bloats the inflatable pieces which causes the hat to puff up. 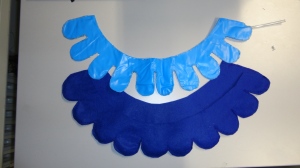 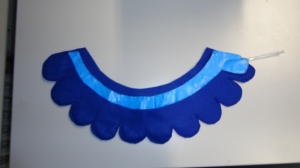 END_OF_DOCUMENT_TOKEN_TO_BE_REPLACED

In March, we celebrated the 5th anniversary of our workshop „Sketching with Hardware“. In 7 days, 12 students learnt to use electronic components, to create new creative user interactions and realized their own physical computing projects. The overarching topic for this course was  „Bionics“. Again, at the final presentation the crowd had the chance to experience five extraordinary experience prototypes. During the following days, all projects will be presented on this blog. Today: Part 1, the AmbiLEON!

When you look at the chameleon in the picture, you see an animal climbing a tree having a green body and a red head. 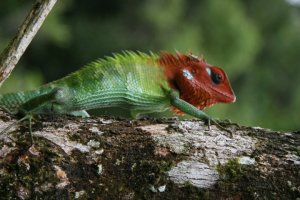 If it’s trying to hide itself, it definitely failed!

During our research in bionics we learned about chameleons that they use their ability to change color not only for hiding but as a reaction to their surroundings. We were ecstatic about this fact and wanted to use this in our project. 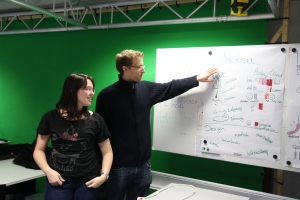 Changing colors is the essential thing about our AmbiLEON-Prototype. Our idea was to develop a kind of lamp which creates ambient light in not static or random colors but in colors which express certain states or happenings.

When we began to build AmbiLEON, we knew the most important things were the RGB-LED-lights.

To create a random color with a RGB-LED you need 1 digital output for every color so three outputs for one LED-Strip. Since we wanted to use many LED lights, more than the ArduinoUNO could handle, we decided to use the Arduino Mega with a total of 14 PWM digital outputs Since the LED-Strips need a 12 V power supply we used transistors to control the 12V LEDs with the 5V digital output.

Now the base was given to let AmbiLEON change its color. The most important ability of our prototype was camouflage. To make that possible we needed the Ambileon to “see” its surroundings. For that we added a Camera to the Ambileon and wrote a little C# app that did the capturing. The captured camera pictures are separated in four columns (one column for each LED-strip), for each coloumn the average color is calculated and send back over serial port to the ArduinoMEGA which changes each LED-strip’s color accordingly. 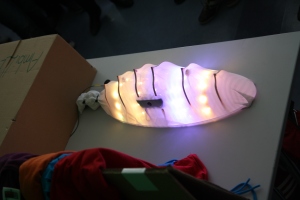